If being a queer, kinky, polyamorous, cisgender woman, journalist and activist is Andre Shakti's business, then it's safe to say: business is good. 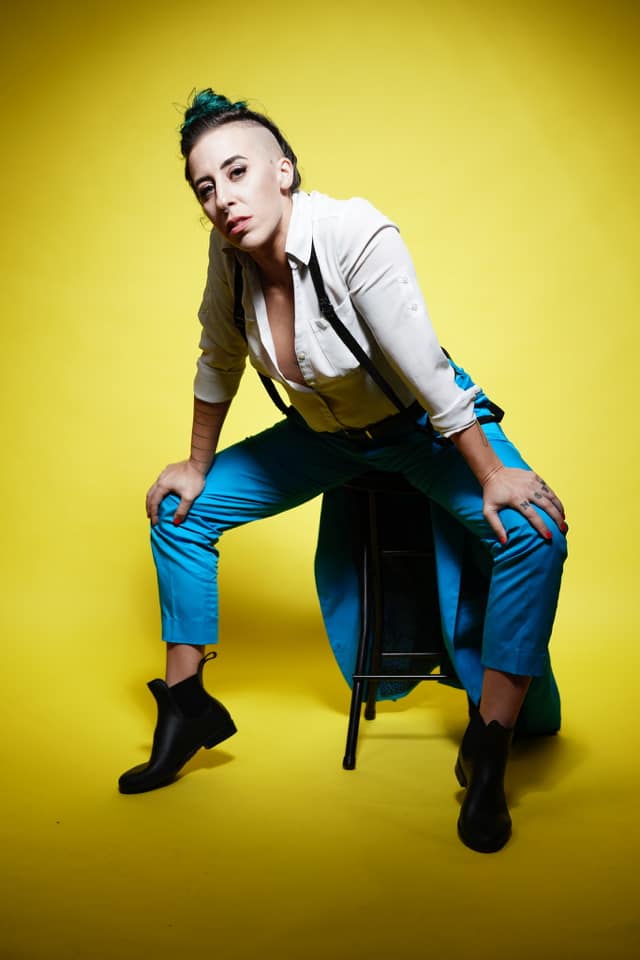 The genius of a sport like fighting, for example — and we can argue about whether games without balls are sports later — is that it’s relatively equipment free. You could, conceivably, do like they did in Ancient Greece and do it sans clothing. As long as you had a…body…and a willingness to fight, you were in. So if the maximum utilization of available resources is the name of the game, the fact that educator, actor/producer, activist, sex worker and journalist Andre Shakti, who left home at 17 to a future uncertain, is playing at all? A total win.

With her work appearing in Cosmopolitan, Town & Country, Out magazine and beyond, Shakti weaves a wild mélange of sex work and wisdom into a creative path that seems as intuitive as it is preplanned. And as a positional point of pride: takes absolutely no prisoners. Does it pay? Doesn’t it always?

And her next installation? Try the Lingerie Fighting Championships in Las Vegas, naturally, where, despite what feels like a jokey come on, very real mixed martial arts fights are happening, and the Brazilian Jiu Jitsu trained former wrestler Shakti is planning on a win. In her underwear no less.

But in the interregnum between now and then? The briefest of interludes here at The Live Five!

You are a multi-hyphenated dream. The journey from New Jersey to now doesn’t seem straightforward at all though. When did the idea start germinating in your head that you’d do/be who you are instead of, say, an accountant?

By junior year of high school I had become something of a sex guru among my peers, who often came to me for advice. I even petitioned my school board to implement a comprehensive, age-appropriate, peer-led sexual health education program, which they did, using my research, several years after I graduated. So yeah, I guess in retrospect it’s pretty obvious that I was destined for a career in sex work and sex education [laughs], but I didn’t have that awareness at the time!

While I’ve certainly experienced the feeling of shame, I somehow never associated it with sexuality or my perception of my own body; nothing felt more natural to me than the ease with which I could connect erotically with people, and I still feel this way. Which is weird, because the town I grew up in is small, conservative-leaning and overwhelmingly white, affluent and heterosexual. My Republican parents were disturbed by my inclinations (what they knew of them, anyway), as well as my precocious sense of autonomy and agency, and ruled over me with disapproval, dismissal and a heavy hand. Needless to say, I left home at seventeen and never went back.

Given the spread between disciplines, in terms of creativity, what’s your preference when creating? Put another way, if they all paid equally which would you keep doing if you stopped making money doing it?

See, that’s assuming I would pick a single discipline! I have a wide array of interests and passions and I love having my hands in multiple pots. I’m also a person who seeks out balance in everything I do. I’m a veterinary technician in addition to my work in the sex industry, and having my participation in such a wholesome industry run parallel to that in a hypersexualized one keeps me happy, fulfilled and measured.

A lot of what you’re doing seems/feels community connected even if in a lot of it it’s just you sitting in front of your laptop writing. How vital of a role does the “community” play in your creative process?

Honestly, I’ve never had anyone make that observation before, but you’re absolutely right. At this point in my life it is near impossible for me to be presented with an opportunity – financial or otherwise – without immediately wondering how I can “spread the wealth” and get other people in need benefitting from it, too. A commitment to accessibility is key. I’ve grown a lot in my journey to become a conscious, intentional, active ally to folks more marginalized than I am. And trust me, I still fuck up, but it’s the constant work that’s critical.

As a woman who became completely financially independent at 17 and has received no familial assistance since, my community has truly given me everything I have. They’ve held, elevated and believed in me. They’ve trusted me. They’ve provided me with vital resources and referrals. They’ve celebrated my successes and mourned my losses. In 2019 they even crowdfunded over $20,000 so that I could leave a domestic violence situation and finally purchase a home of my own. I owe them everything, and I hope that continues to be reflected in my work.

How old are you now and does any version of what you imagine for your life have a foot in the future?

I’ll start by saying that I’m 33 years old and will be turning 34 on June 5th! I love being in my 30s – I’m hotter, more financially stable and way more secure in what I want, as well as how to get it. Honestly, I can see myself operating in the sex industry until I’m in my 40s or 50s. I thoroughly enjoy busting the myth that sex work is an industry solely for folks in their late teens/early 20s, alongside the ridiculous idea that sex work must be transitional and/or temporary. I’ve been in this work for 15 years – that’s a career if I’ve ever seen one!

But now I am running a bimonthly LGBTQ+ virtual strip club called SANCTUARY. We’ve been going strong since March 2020 and we prioritize BIPOC, transgender, disabled and fat dancers, as well as dancers over the age of 30. We have an incredible roster of rotating performers from all over the world, and next month, in June, we’re celebrating PRIDE! Join our next show!

And your appearance in the fight game…? You know some would argue that this has been your game all along.

Well, I’m gearing up to fly out to Las Vegas tomorrow to fight for the Lingerie Fighting Championships, which will be streaming live on PPV the evening of Friday May 13th! I’ve always been athletic and I have about half a dozen years of formal BJJ training under my belt; in fact, a large portion of my sex work revolves around the niche genre of session/fetish wrestling. Folks may have seen some of my work for Ultimate Surrender, Evolved Fights, Academy Wrestling, and many more. I love throwing down! This will be my very first time fighting for LFC – which features a mixture of MMA and pro wrestling – and I am pumped.