Trans, an action AND a state of mind, might also mark the place in space where well-received literary genius gave way to the call of commerce and precisely when the talented Mr. Finnegan Shepard was [re]born. 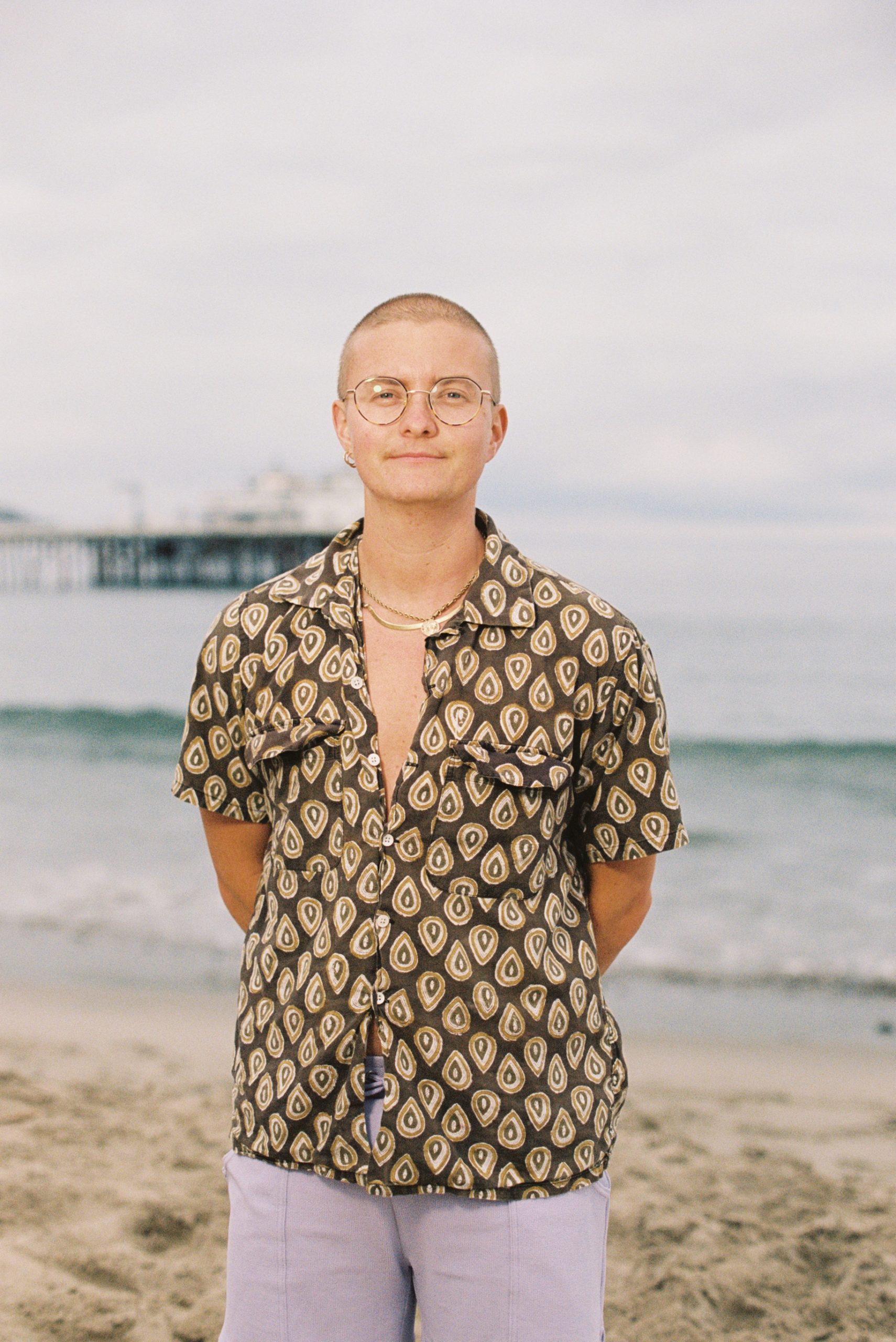 In a space and a place that’s gotten overheated and played as a cat’s paw by over-the-hill comedians still trying to swing at relevancy, or politicians playing with people’s lives, there’s still a very real planet where people like Finnegan Shepard are moving well beyond all of what they knew — the classics, philosophy and a writing career the envy of those with writing careers — and into terra incognita, at least for grad students. Which would involve, beyond a shadow of a doubt, commerce.

And not just any ol’ commerce but commerce that’s attached itself to the trans community and its needs and interests in the shape of the almost perfectly named Both& Apparel. Grown out of the realization that transmasculine/AFAB bodies require/desire a different angle of attack when choosing couture, Shepard stepped away from another life at Cambridge, rolled up his sleeves and got to work.

Which maybe is not that surprising but when you think of how many football players suddenly start playing hockey, or how many bowlers decide to dig in to tennis, you might realize that this is a big deal. And an even bigger deal? That Shepard, who now as CEO clearly hasn’t gotten time for our Live Five hijinks, actually made room in his busy day.

For? For our hijinks, natch! So, yeah: The Live Five with Finnegan Shepard…be about it!

We’re having a moment now, a moment where specifically people are proclaiming that they’re done with things as they were and are looking at crafting a future for themselves beyond whatever had been expected. Once the dust settles though, and here’s hoping it does, how much do you imagine we’ll level set at just being existentially miserable over the condition of being alive versus the ways in which we are conditioned? I mean I’d kill for the euphoria trans folks seem to exhibit being their authentic selves as I’ve never had a comparable one just being a man. In fact, with the numbers of people trying to kill me, I live in America, I find being a man a burden at times.

The problem with most things is that the truth lies somewhere in between. Right now what we see online is a conversation that prioritizes/valorizes extremity and dogma over more nuanced, thoughtful discussions. Of course this too is a kind of intervention against how conversation was siloed/controlled by certain groups historically… but ultimately I think we find ourselves at a crossroads where so many of the framing tools we use aren’t useful in the long run.
Specific to your question about the gender euphoria expressed in transitioning versus the general human misery/doldrums we all existentially face—in many ways I think trans people have been forced, ironically, into a binary presentation of either miserable or ecstatic, trapped or free. It’s similar to the advantages and disadvantages of the “born this way” gay movement, in which the community could leverage more widespread acceptance via a tactic that in many ways has backfired, or at least not been the original intervention of queerness that folks wanted.
There’s a similar tension in the suffering/enlightened narrative around transness. What I believe, and what I think many folks in the community would second, is that transitioning undeniably has a huge impact on our mental health, our feelings of joy and wellness and comfort, but it also can’t “fix” the fundamental challenges of being a human and all that entails. There’s a cautiousness in going there because we are fighting over very basic rights like access to gender affirming healthcare and those who would strip us of that right are looking for ins…that is, ways to point to how “Tik Tok Turns Teens Trans” and all of that nonsense.
All this to say: I think every human has to do the messy work of translating themselves and feeling known. There are tools that make this easier or harder, but no set identity or set of tools that can entirely “fix” the dissonance, because the dissonance of being is baked into the experience necessarily.

In researching you for the first time I was exposed to “transmasculine” versus “transgendered” and it had a different flavor and energy behind it. Was that actual or did I imagine this? And how are you understanding how that works?

I’m not an expert of the semantics or the development of the term transmasculine, but I too feel there is a different flavor and energy. From my understanding, it’s more of an umbrella term than transgender, that includes a much broader swath of identities–folks who aren’t medically transitioning but to certain degrees identify with masculinity in social dynamics or presentation. It strikes me as a very open and fluid term that allows for a broader definition of/playfullness with what one is “aiming for” when they “aim” for masculinity.

Well, if you know, you know: Wallace Stevens had a day job in a bank…so it shouldn’t be so strange that you’ve started a company versus embracing the life literary: but which do you find requires a greater level of creativity? Or is that a stupid way to be thinking of things?

Haha, you know you know. Short answer: they both require very different kinds of creativity. I spent most of my 20s trying to figure out what was the best career path to nurture me as a writer: I tried only writing, I tried adding in academia, I tried adding in retail, I tried adding in carpentry, I tried adding in content strategy. I’d say carpentry and entrepreneurship have been the most compatible matches. But you know, anything involving a spreadsheet or logistics I would stop immediately. Everything else I would keep doing.

I’m sure you’re familiar, if not with Jim Fouratt himself, then with his role in the Stonewall riots. He’s been, unexpectedly, vigorously anti-trans, characterizing the movement as the product of self-mutilating homosexuals. This seems fundamentally wrong to me because it seems, largely, none of his business. How long do you think before inside-the-fence detractors give up the ghost on stuff like this?

I consider myself an optimist, but when it comes to this question, I think we have to have a historical view, and when we look at history, we don’t see the fence coming down, we just see the perimeters shifting over and over. It’s baffling, but it’s stood the test of time, which makes me wonder whether there’s a whole other way of approaching this problem that needs to be invented. But you know America…surely I can’t answer accurately, but I’d say yes–it seems absolutely batshit.

Who are your creative lodestars? In literature, academia, or business?

So many. Maria Popova played a huge role in me “recovering” from academia and realizing there are other, interesting ways of applying a love for language and storytelling and curiosity in the world. That whole circuit in general (The Universe in Verse crew) is the friend group I would most like to claw my way into. Literature heroes are ever unfolding, as there’s just so many of them. In business, I basically mainline HIBT, both for education and for catharsis, and the founders on there that doggedly kept after their vision with little to no outside validation and a sense of humor astound me. I’m thinking in particular of Tim Leatherman. Also, My older sister was the person who inspired me to become an avid reader and writer. She’s spent a long time in Academia but is now transitioning out into her own next venture. So we’re kind of a family of ex-academics.