Laina Dawes Throws Up Devil Horns…On the Black Hand Side!

Thought being a Black woman creative could be sticky? Try mixing in a deep and abiding love of heavy metal. 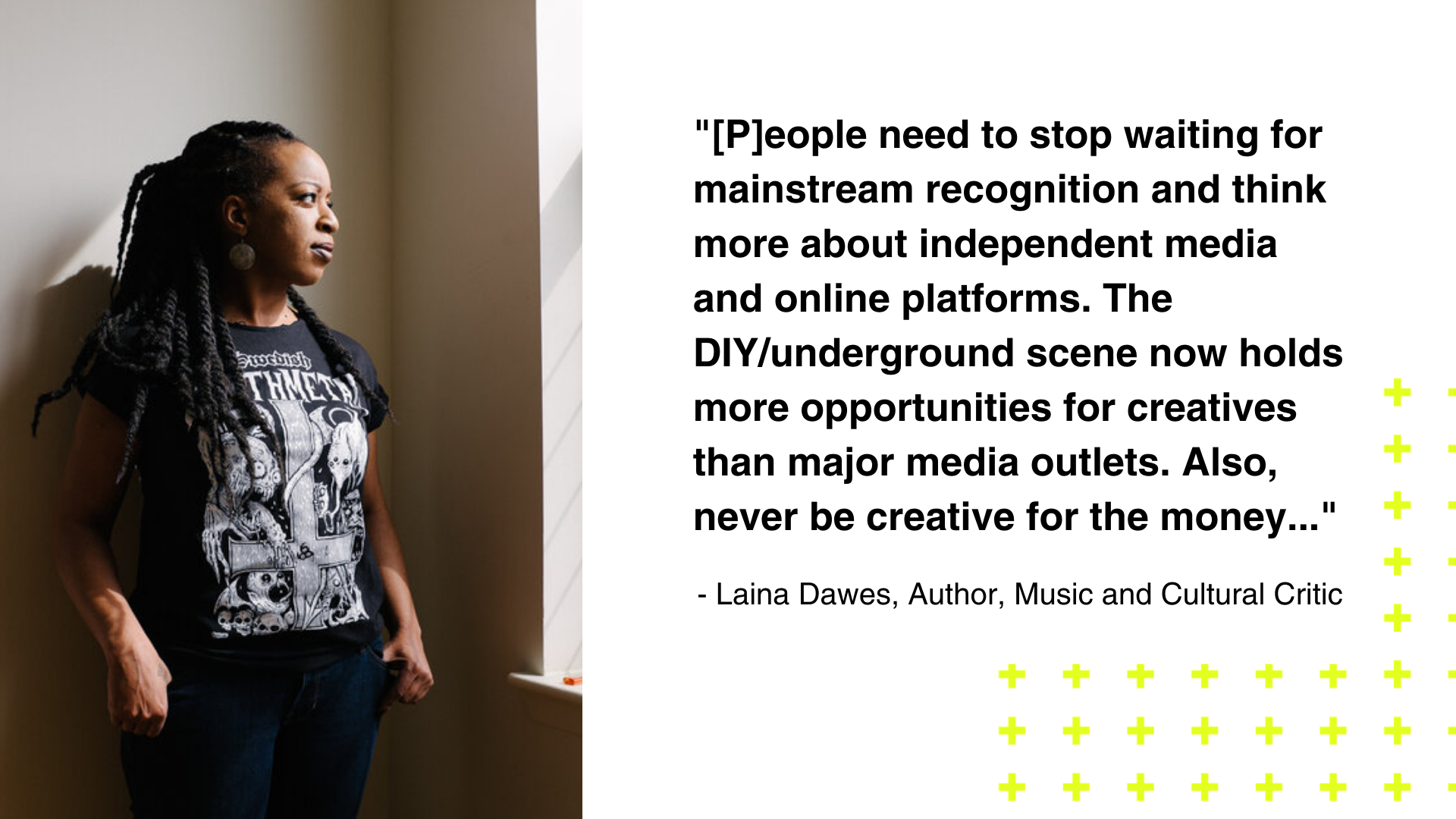 And her muse in this instance was heavy metal music. In her book What Are You Doing Here?: A Black Woman’s Life and Liberation in Heavy Metal, Dawes digs deep into crafting some enduring art out of music that was sniffed out as being unsophisticated by those that felt the same way about her.

Well we felt totally different about her, so welcome to The Live Five with Laina Dawes.

Your first purposeful and noteworthy act of creation as you remember it was what?

The publishing of my book, What Are You Doing Here? A Black Woman’s Life and Liberation in Heavy Metal (Bazillion Points, 2012) changed my life, and I think it gave me the confidence that yes, I can write about heavy metal from a racialized perspective. What was great about that experience was that I wrote it to find out why there was (and is) so much resistance to Black women being involved in the culture.

I was constantly told by my Black friends that by being a fan, I was a discredit to my race but on the other hand, I was told by (and harassed by) white people at shows, so I never really fit in anywhere. The outpouring of young Black metal fans that contacted me after the book was published was both justifying and sad, as many shared stories of being lonely because they were even more ostracized for being a metalhead, and justifying because I met people who had similar stories to me in discovering the music.

I really do think the book changed a lot of people’s perspectives on race and gender, and it made them think about why music is so racially segregated. Because of that experience I decided to go to graduate school and eventually go on to do a Doctorate. Currently I’m finishing my dissertation that explores manifestations of extremity in heavy metal culture and why the subculture can be empowering for black listeners.

You’ve written a lot about music and this grew out of a love of music, yes? How was it you didn’t decide to spend more time playing it?

I grew up in a musical family, as I have family members who are practicing musicians. My grandfather taught me how to play piano, and I went on to play the flute and upright bass throughout public and high school. However, I had other things going on, like trying to retain my sanity. I also loved writing and was more passionate about fulfilling my dream of being a writer for music magazines than anything, as I was obsessed with music magazines as a kid. I prefer to hang and chat with musicians about their process and learn about the industry as a whole, than playing. I do regret not keeping up with the bass guitar, and learning music theory, though!

How hard is it, in general, for you to create and would you agree that we’re mired here, at least in America, in a creativity crisis?”

I don’t find it hard to create as a writer, because I love it. However, as a writer I’m always trying to hone my craft, and these days I struggle to bounce between journalistic writing and academic writing. In 2009 when North America went through a massive recession, I lost all my print gigs within one month. That has never bounced back, really, but I have been okay writing online and for some one-off print features. At that time I was still living in Toronto, and relied on American publications for work. Writing about metal in Canada was really hard, as the racial politics are way more messed up there, than here in New York.

Because of the work I do it is much, much easier to work in the States and write for UK media than Canadian publications, which is really disappointing. America was where I feel my work has been appreciated, in part because of the diversity. But I do think that there is a creativity crisis in America, as there is a dearth of good quality platforms to write for, and as I also freelanced as a concert photographer — something I was extremely passionate about — the combination of the recession and Covid means that I literally had to give it up, as there was nothing to shoot and publications are really not interested in freelance music photography.

Describe to us your connection to the creative impulse?

I think that I have risen against adversity for sure. I was told as a kid that I would never make it. My mother, bless her heart, once criticized my ambitions and said she would be happier if I was a cashier in a grocery store. Being Black and being raised in a white family in a very rural environment was horrible, and I pride myself in getting out of that situation, otherwise I would have killed someone, so yeah, there is that…..

But I think that I continued to do whatever I wanted to do because I never thought anyone gave me a legitimate reason for not pursuing what I wanted to do. I never took “you can’t do that because you’re Black” as a reasonable answer for anything. I was raised in a very creative family that deeply respected art and music, so for me, it was natural to pursue all the artistic things I wanted to do. On the other hand, I have to give Henry Rollins a lot of credit because he taught me how to channel my anger into productivity. And it worked.

What creative advice would you offer those who believe that they are being denied access to the creative impulse?

The advice I would give is to never listen to anyone who is critical of your creative ambitions. It will be a difficult journey with lots of rejection, but the sense of satisfaction you get when you publish your first piece, the first time your song gets posted online, or you open for your favorite band, will be worth it. I also think that people need to stop waiting for mainstream recognition and think more about independent media and online platforms. The DIY/underground scene now holds more opportunities for creatives than major media outlets. Also, never be creative for the money…it will show in your work. Work on projects that hold meaning to you. I write for a certain publication that pays me shit, but it forces me to hone my writing skills. To me, it is a wonderful opportunity to always challenge myself.