Making the Scene With The Faux Queen

Fauxnique's life in drag has been anything but...and full of thrills, chills and exactly what a drag queen pageant winner should expect: fabulousness! 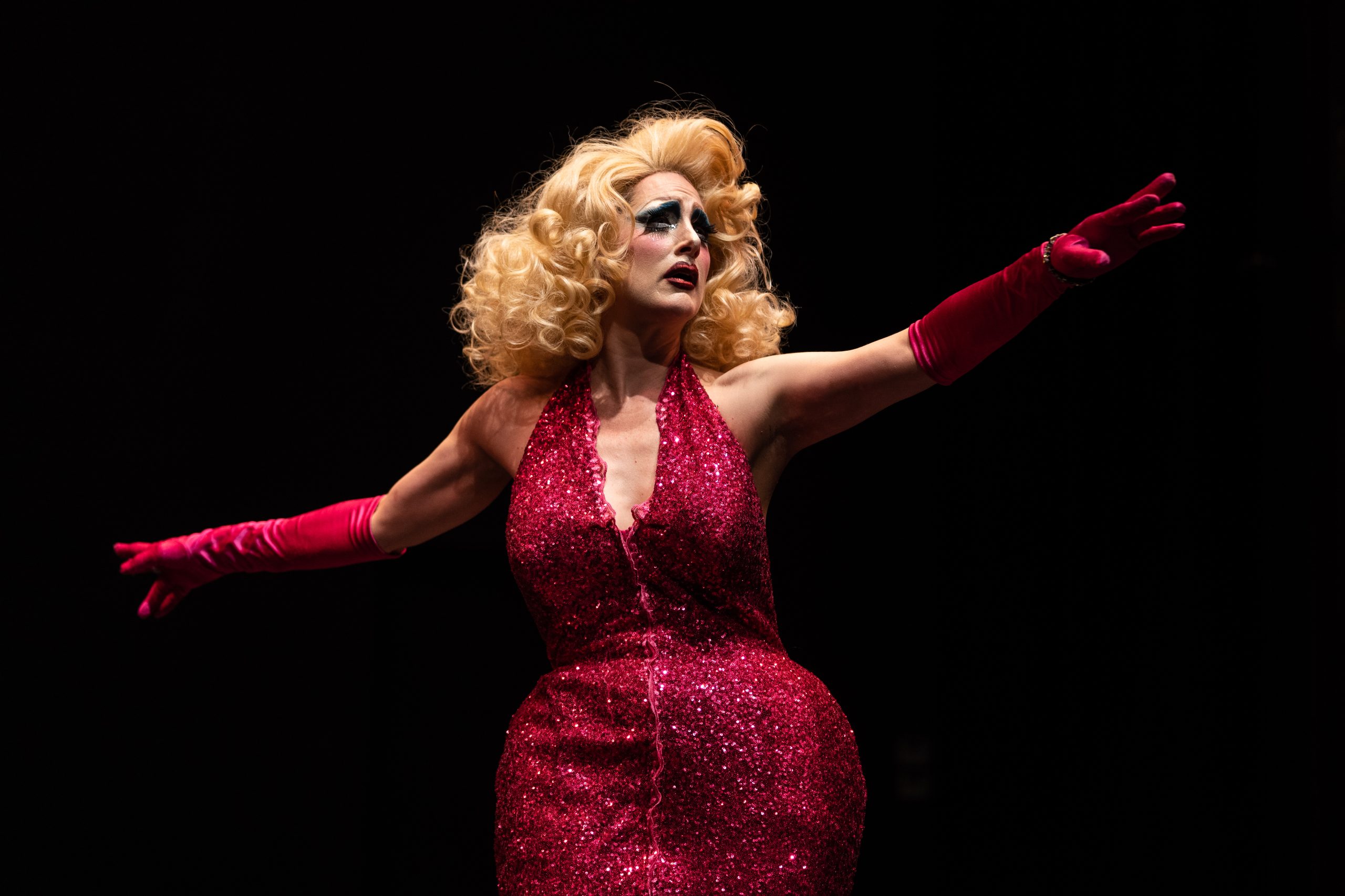 Everything changes. And if you loved the way they were before, you bemoan the change, and if you loved it less so, this might be something that you celebrate but years ago when the now 51-year-old Monique Jenkinson was winning the Miss Trannyshack title and crown in San Francisco of olde, the title was the least significant of issues. Though the name was eventually retired as our language evolved around it, Jenkinson’s bold take as Fauxnique, a woman playing a man playing a woman, was whatever sits beyond evolution.

So is it any wonder that as the only child of a dairy industry dad and a talented homemaker mom, San Francisco’s Jenkinson/Fauxnique has resisted the call of Los Angeles and its temptation to put everything in tiny boxes — “Every time I think ‘maybe I should move to LA or New York or Berlin or…’, something interesting comes up to keep me here. And I love my people here.” — and just taken the concept and conceit into nooks and crannies previously under explored? No, it’s no wonder at all.

And she gets out and around. New York at the end of April for her just released book, Faux Queen: A Life in Drag and Los Angeles at the beginning of May.

And now? Showing up for The Live Five. With the fullest of fanfares. Enjoy…she/her is.

The conversation around trans issues has twisted and turned in some pretty interesting and unexpected ways. How ahead of the curve do you feel in regards to your creation of Fauxnique?

I’m connected to trans issues as an ally, having danced in solidarity under the huge umbrella of queer culture with my trans siblings, and I’m honored to be part of this conversation in any way that might be useful. In the world of drag queens, Fauxnique and I were ahead of the curve, but by the time I arrived on the scene, lots of women, cis and trans, had already been using drag as a place to explore the outer limits of feminine performance.

Describe for us the process of how their creation came to be. And why a book?

Fauxnique uses she/her pronouns and loves to reclaim feminized language — “actress, authoress, editrix” are all words I love — and I love to push back against the concept that linguistic feminization is some kind of diminishment. I think neutrality is fake.
Fauxnique comes right out of this concept: that I found “authenticity,” (a concept of which I’m suspicious) in the practice of drag artifice. I created Fauxnique as a way to participate in drag performance, ignited by my own drag fandom. I soon realized I already had a drag past as a fledgling ballerina. I had gone deeply into ballet and trained hard into early adulthood, and that training was drag training: ballet is drag. It is this hyper-stylized feminine performance.
So, of course, when I created Fauxnique as a character, I made her a ballerina who has fallen on hard times and is slumming it in the gay clubs. Camp loves tragedy and drag loves to make fun of itself.
Fauxnique also gave me a way to come back around to sequins and glamour and spectacle at a time when art, dance and music were immersing themselves in a stripped-down system of values. I write about this in the book, about trying to fit in with the plaid flannel people when I was a glitter person. Fauxnique demanded that I reclaim my hard-won ballet skills, which the flannel aesthetic disdained, and bring them to the nightclub, where the audience ate them up. And this reclaiming of ballet through the comic mode of drag unexpectedly healed a lot of old wounds that I had sustained over the course of my training.
But the genesis of Faux Queen: A Life in Drag has two sources. The drag numbers I created for Fauxnique grew into a full-evening cabaret show. I started writing monologues for the show and the monologues became essays. The book also grew out of the really elaborate answer to the question of how it is that someone like me can be a drag queen. I had also done a lot of thinking, talking and writing about gender and the performance of femininity, which invites deeper analysis.
A couple of people I trust asked if I’d thought of writing a book. I pitched it, and it became a project. People saying they wanted to read it really kept the motor going. Writing this memoir has been a pleasure and a chaotic trip through the dark forest.

As a woman, playing a man, who is playing a woman (and is that even the right way to look at it?) what goes into it that the average person misses? And yes, this definitely refers to the secret sauce. If such a thing exists.

Why do I find the concept of “secret sauce” so unappetizing when applied to drag?…Ew. While there is no “right way to look at it” I push back on the phrase “woman playing a man playing a woman.” For me, “drag queen” moves beyond “man playing woman.” Most drag queens are not trying to look like “real women,” whatever that phrase means. I think that is something the average person misses. For me and many others, drag is a zone in which we get to play with the tropes and extremes of femininity. The fun, the oppression and everything in between. As Fauxnique, I perform and put on femininity just as much as any cis male drag queen.

Speaking of which what goes into coming up with routines? How do they start and how do you develop them and is it a group effort and if so, who is in the group?

I don’t want to be cunty about language, but as a drag queen it is my birthright. In drag, as in vaudeville and jazz, we call ‘em “numbers,” honey!

In contemporary dance we perform “pieces,” although sometimes the results are remarkably similar. But I’ve been fortunate to be able to do my work in a variety of contexts, from nightclubs to theaters to museums. In the past, drag numbers for group shows often came as assignments for theme nights, which was always fun.

At the clubs I came up in there were some really great themes, from “What’s Your Favorite Scary Movie?” to “Save the Planet” from “Industrial Design” to “Kate Bush vs Björk” to the irreverent, hilarious and problematic “Ebonica Hanukkah,” a night of Black/Jewish unity!

A theme could really shape a drag number: you have a concept, then choose a song, then build it from there. Often it is a group effort, with backup dancers and prop assistance, often it’s just you doing a more grown-up version of singing into a hairbrush in front of the mirror.

For my feminist drag cabaret show The F Word, I had a lens through which to choose my material, though my concept of feminism is pretty wide. But my contemporary dance process uses drag in a more expanded way, involving more research, experimentation, slowness, weirdness, openness.

With an unlimited amount of resources at your disposal what would you do? Outside of enslaving us all and crushing your enemies?

I have no interest in enslavement. I want drag to be a project of liberation! I maybe have a couple of enemies I wouldn’t mind crushing though.

I would fund all of my favorite performance venues for life (Oasis and CounterPulse in San Francisco, to start) so they could take risks and commission performing artists to make ambitious, weird shit. I would also love to make a piece on the Bay with drag queens in giant gowns that function as boats!

And, of course, I’d love to whisk my besties away to a house on the water someplace gorgeous, like Italy or Greece. I’m a sea witch.