Once Upon a Mr. Ron Athey!

David Bowie steals/borrows from you AND Senators excoriate you for your extreme performance art? Well, then there's a very strong chance you're doing everything right. 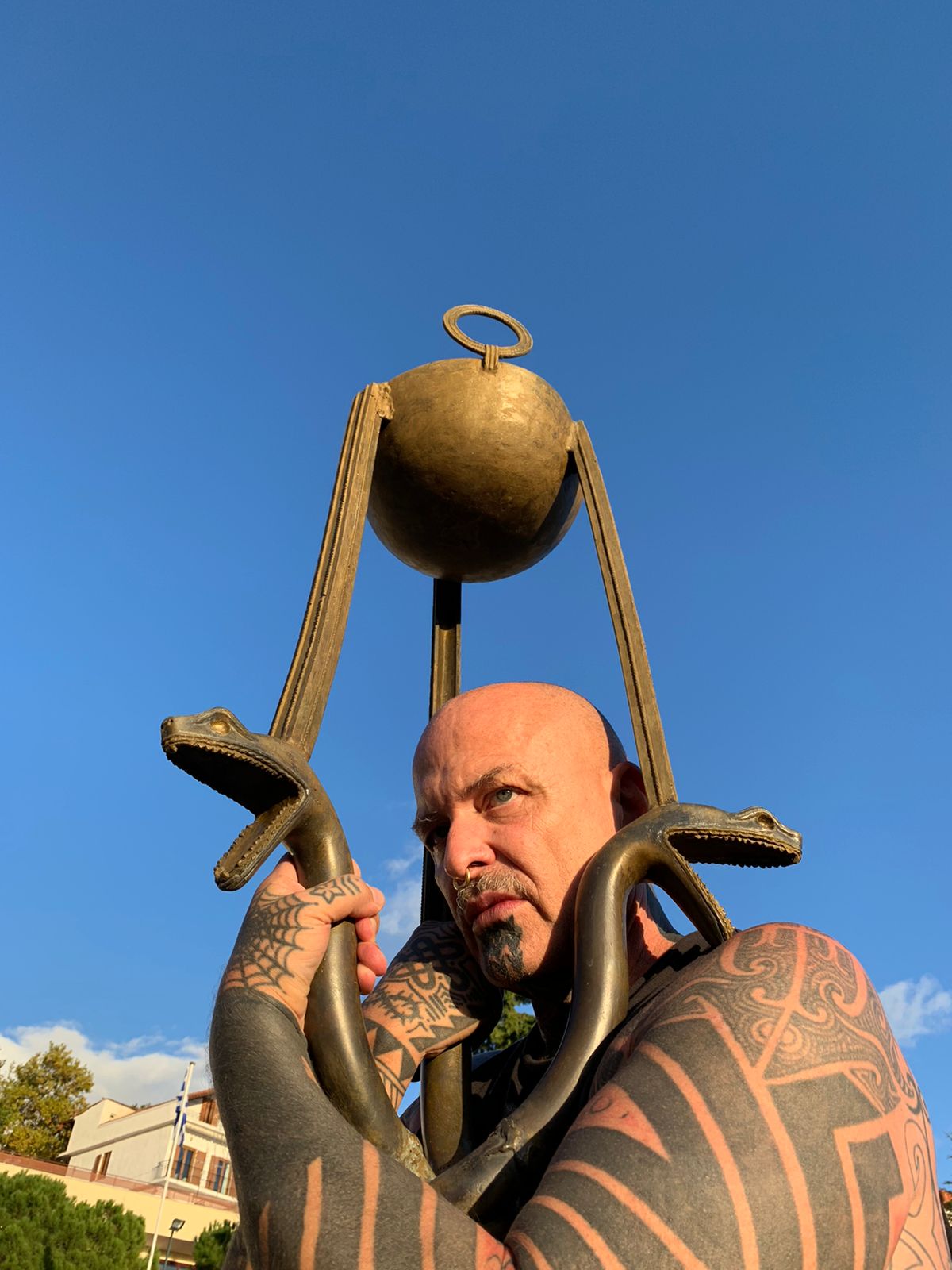 You’ve got your corpus, your body and beyond that, in a Cartesian sense, you might also have a whole lot of ideas about how that body should move through space and for what reason. For most of us the parameters of our wondering/wandering might range from jobs to jogging or anything else involving the body as a relatively passive participant to whatever we’re entertained by at the time. Ron Athey, though, has always had different ideas about the body he calls Ron Athey.

“I always refer back to AIDS because I had a cloud of death over me from 1985, until I trusted that the drug cocktail was working,” Athey once told Vice. But “I’m an outwardly very expressive person, and with the intense conditions of the time — real scenes, real activism, real death, real loss — I effortlessly made all of that into work because of the way the pressure was.”

And his work? Insofar as it involves branding, flesh hooks, scarification, surgical staplers, for beginners will, perforce, involve blood. Lots and lots of blood. As a fuel for an ecstatic, quasi-religious experience that uses the body to escape from the body and also makes Athey a lightning rod for all kinds of culture war controversy. All/none of which concerns Athey in the slightest.

You see his interests are singularly and almost monomaniacally his interests and while you’re welcome to participate as many have in shows like Hallelujah! Ron Athey: A Story of Deliverance, Judas Cradle, or the Incorruptible Flesh series, you wouldn’t be the reason he is participating. Nor are the performance art accolades heaped on him by way of the Los Angeles Artadia Awards he’s won, the American Academy of Religion’s (AAR) Religion Arts Award, and the Foundation for Contemporary Arts Fellowship. Those are nice-to-haves and very clearly not must-haves on Athey’s wild ride.

So, in a break from the abattoir and doing a little world traveling he came by The Live Five…and honestly: we couldn’t be happier.

Coming out of a punk rock scene that always seemed particularly sexless — witness: Johnny Rotten always described sex as “boring” and for old hippies — how much did any of that frame your decision to answer to a very decidedly different muse?

I think there were a few things brewing in and out of the scene. Members of Nervous Gender straddled the hardcore leather public sex scene and however you’d classify their sound, electro punk now, though that wasn’t really a thing, they would play in jockstraps and harnesses at spaces like the Brave Dog. Rozz and I postured a lot publicly as an act of defiance that became reality. We had to act out with public piercing and branding, making the move on bi-curious boys in the scene. Performing sexuality.

But I was in the middle of Rozz’ projects, Christian Death, Daucus Karota; Eva O’s Super Heroines, Speed Queens, more queer core bands like Nervous Gender and Long Beach based bands SST (strong silent types); plus the OC-Pomona crossover of Adolescents, hence Rikk Agnew coming to Christian Death as guitarist. And all these relationships to rock weren’t my skillset or interest. I wanted to update the Gysin/Burroughs Cut-Up thinking, express something beyond lyrics and sound, noise was damned close and a big component of my projects. Gallery arts were too stodgy at the time to be interested or interesting!   But seeing Johanna Went live, looking at photos of the Viennese Actionists in High Performance Magazine. And again, the porn scene crossover, made performance a place to navigate elements of the world I wanted to be in!

That being said, your work doesn’t seem especially “sexy” in any direct way. But you’re experimenting with form it seems and are dealing with bodily functions. Plus pain, or endurance, seems to be a factor as well.

Some readings are that, if performer/actor Bob Flanagan was a masochist, self-avowed, I’m definitely a sadist. That’s not a straightforward read though. For instance I do structural bodywork, which evolved out of Rolfing, and I tune into the tissue not the person’s pain threshold. Hence, the need to negotiate how much is agony. In performance, bleeding myself, or cutting/piercing/branding/electrocuting another person, it is literally heightened ritual and more important than pedestrian sensations. I’ve never worked with someone who wanted it to end before it was fulfilled. If anything, performers are cast for their skills.

But removing the sexy from penetration is a huge part of what “post-porn” is. My burlesque riffs, such as in 1994’s 4 Scenes In a Harsh Life, were what Vaginal Davis would call sexual repulsive. More recently, the Self-Obliteration finale is behind bloody glass that ends in an ouroboros spectacle that’s only sexy to about one percent of the audience [laughs]. Here’s a version from Glasgow that has an Act 3, being buried in rock salt dumped from the lighting grid.

Given the amount of blood you’ve shed on stage, your work doesn’t seem particularly violent nor do you seem to be any kind of conventional version of a “hard” man. Not a lot of hostility, anger or the kind of vibe that gives rise to physical violence. So where is this coming from and does the Pentacostal thing your family was into explain it?

I wasn’t raised by either parent. The father was a Navy dude who lost custody of me and my sister. We’re a total of eight siblings with two mothers and two fathers, raised four and four. Basically, raised by the twisted grandmother and aunt, with both the UNLOVED branding and messianic complex. Mother was, and is still, in the nuthouse. Severely schizophrenic, paranoid, violent and epileptic.

I met my father and younger brothers though for the first time when I was about 25 and my father sought me out. He’s super easy going and accepting, but hard for me to understand what a father was at that point. Now he’s retired to his home in the Ozarks and I don’t know how to visit.

The Pentecostal just explains my logic system and obsession with esoteric Christianity, Queer Theology, and any forms of ecstatic practice such as Sufi, Hindu or shamanic practices.  I did grow up in Pomona, California, which was exactly half Black and half Chicano, so to survive as a queer person I was harder than hard. Also, those were the first boyfriends, drug partners, and so on. I was a junky, did a little bit of jail time twice for nonsense and then pulled it together. So “hard” from living in that lane but not really buying it as a way of life. Always nonviolent, a thinker, but not a tenderoni. I’m creeped out by that culture and find it passive aggressive.

For me the issues have to be built in. But I won’t strategize something like concealing my HIV status. The truth is my activism, the work is my art, it’s embedded with message but it’s not preaching to the choir, or otherwise. There are philosophical questions about serving, about the notion of healing, about encroaching fascism, all without naming Trump. I wouldn’t want to lower the tone! Hence, making a choreography around Brion Gysin’s 1960 sound recording pistol poem on a 5 x 5 grid, the grid is fascistic.

But I’m trying to reckon with where the current pandemic is, the economic crash, the sad state of arts funding and virtue signaling, Texas malarkey, pathetic democratic mediocrity as the alternative… no there isn’t much hope! It [America] might coast forever but an exit plan would be smart. I loved the six years I lived in England where I was somewhat apolitical. Could ignore the USA and UK and just be an artist citizen.

Now I drive myself crazy on Twitter trying to understand false information as a valid opinion. But I do appreciate the discourse around joy having to be a part of our life no matter how much in protest we should be. I’m against nihilism but it’s a thin premise currently! And yes, I go in and out of weightlifting and trying to get back in. I enjoy being fit and strong and if I’m going to keep living it’s not in a painful weak body. Much has been written about the benefits of being a long-term HIV survivor, 1986 onwards for me, and the need to feel strength over illness.

Fakir Musafar, Stelarc…aspects of their work that seem transhuman, predicated on using tech to create third arms to augment our bodies, have influenced you? However, since you’re not really part of a collective, how is creativity working through you and your pieces? Or is it more just a process of “what the hell am I going to do next?”

Much has changed since then but I think his message of freedom and how to remove the judgement for yourself and others was deep. I never followed anyone but acknowledging who opened the doors is important. Fakir, Annie [Sprinkle], Carolee Schneedman, Viennese Activists, Johanna Went, P-Orridge, Gysin/Burroughs, many of the French thinkers for me especially Georges Bataille and Jean Genet. I need to know where I sit in my time.