When you're the progenitor of what they're calling Terrorist Drag, the line in the sand you've drawn is both inevitable and undeniable. 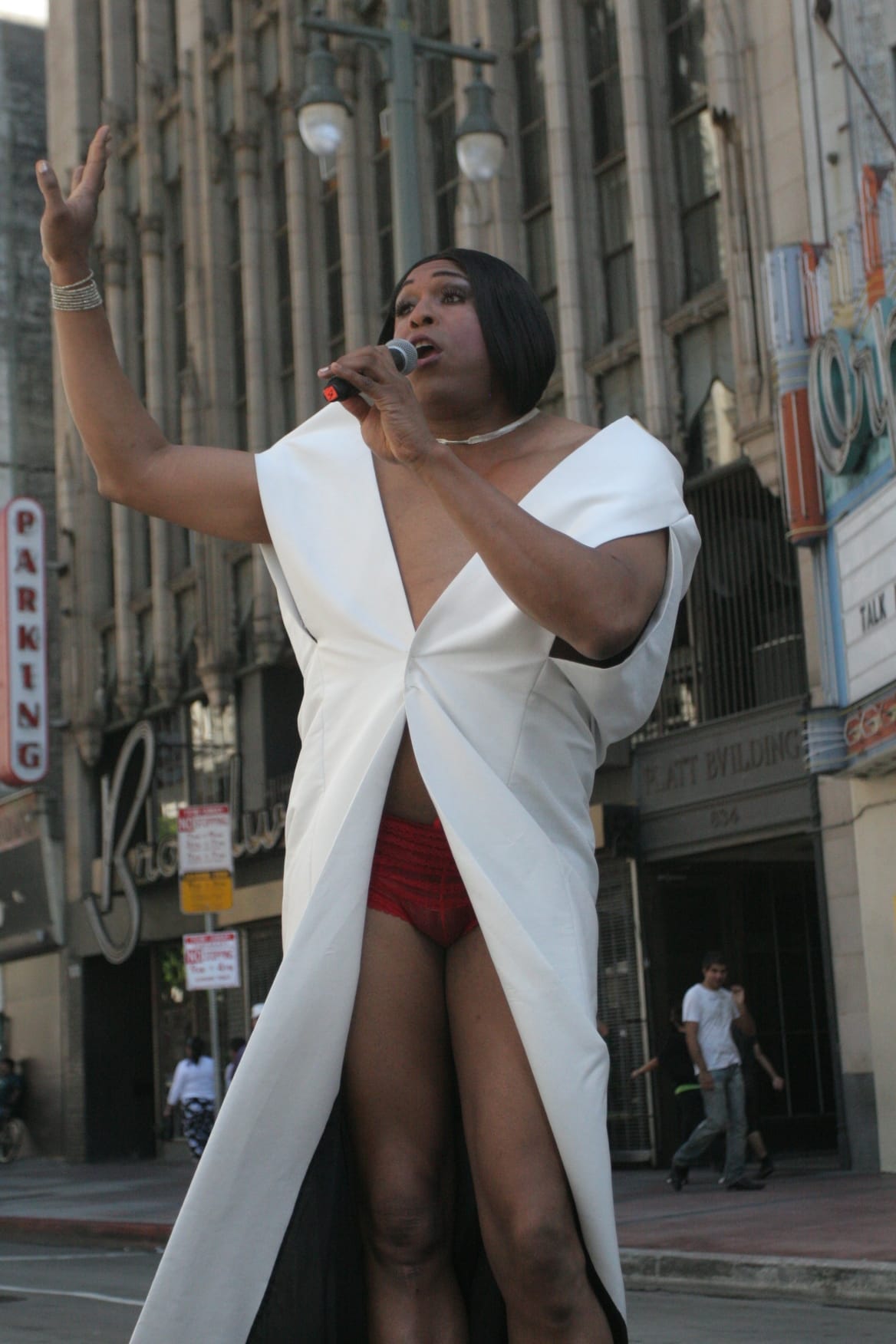 Let’s start with the name since nothing says perfect like naming yourself after the adjectival take on private parts: Vaginal. And the Davis portion? For that you’d have to bone up on your ’60s revolutionary history in the form and fact of Ms. Angela Davis, firebrand, political activist and the only professor we know who beat a murder rap. So it goes then that the intersex Vaginal Davis, an artist, composer, curator, filmmaker, writer and one of the founders of the homo-core punk movement both was and remains, a force to be reckoned with.

And beyond that that there was a day when she decided that her hustle was her and she was her hustle and the world concurred. To the tune, most recently, of $10,000 for the Sustained Achievement Award from the non-profit organization Queer|Art that extends support and mentorship to LGBTQIA+ identifying artists wherever they are to be found.

So that we tracked her down in her Teutonic redoubt was fitting. That she gave us five for The Live Five? Even more so. So…dig it!

Depending on which end you look at your career from it either seems impossibly unlikely or likely impossible and yet…you have fashioned, whole cloth, a creative universe and an existence that must have surprised friends, family, you…just a little bit. So how much of it was predestination and determination and how much of it was accidental and luck?

By Juniper thank you kindly for thinking of me as having a career.  It makes me sound high fallutin’ and professional.  Like I actually know what I’m doing. But you see I have a love/hate relationship, being born and braised in Los Angeles. Yes, it’s the city of the tired and tragic automobile culture — I was glad I never  learned how to drive a car — and somehow I managed cloven hoof to mouth to get by on bicycle and public transport. But almost everyone in my family is dead except my big sister who is 10 years older than me. Even younger members like my two nephews, killed by the evility of advanced capitalism/danger capitalism.
So I keep in touch with most of my friends via post, ye olde fashion practice of letter writing. I’m much more analog than digital. Only recently have I had a laptop, smart phone and internet access. I’m a complete luddite when it comes to technology, like the ancient German saying “Tunten und Technik”. But handwritten letters are my specialty. I even still own a portable typewriter but I don’t use it for letter writing. I find letters to be a mercurial gift that you can keep displayed in adorned boxes or hidden and buried in the backyard like a sacred cadaver under a Yum Yum tree.
I also love it that the late drag diva Dorian Corey from the Jenny Livingston film Paris Is Burning had killed her abusive lover and mummified him using pleather, lye and cheap beauty supplies, keeping the body locked up in an old travel trunk in the boudoir of her Harlem flat. They found the corpse only after Miss Dorian died in the 1990s. I’m sorry. What was your question?

The Vaginal Davis nom de drag is delightful. How much contact have you ever had with Angela Davis?

The original Ms. Davis, as in Goddess Angela, keeps a very tight schedule as a highly in-demand international lecturer, but my New York artiste friend and frequent collaborator Jonathan Berger went to school with her niece who told her famous auntie about me, and it seems she was intrigued enough to agree to meet and be filmed for a segment of my Fertile La Toyah Jackson video magazine, but alas it wasn’t  to be as her itinerary had to change at the last minute. An East German friend who has known Angela Davis for many decades said it was probably for the best. One should never meet in the fleshy flesh their idols. When I lived in Hollywood on the Sunset Strip at the location that was my Hag Gallery I would see frequently that other Miss Davis, Bette as we both frequented the same offbeat florist shop.

Getting out of LA makes sense but your move to Berlin confused me. Not because I don’t love Berlin, but it seems too small of a city to hold you. How has the city been to live/work in? And I’m speaking creatively…

Like a lot of Americans I have a German background through my pater familia. Berlin is also a sister city to Los Angeles so in a strange way it makes sense for me to be living in the most patriarchal of all Fatherlands. My grandfather was born in Berlin, though my father was born in the Polanco District of Mexico City. My father was 19 and my mother in her 40s when they met and fornicated, producing me. But if you have a German grandfather then you are considered German by law and can have dual citizenship. Of course when I moved to Berlin in 2005 it was much easier for Americans to immigrate here. It’s become much more difficult now.
In any case it’s great to live and work someplace where everyone isn’t all wrapped up in the American Industrial Entertainment Complex. I minored in Philosophy at University so having a working knowledge of Deutsche was a prerequisite, but my language skills in German, Spanish, French, and Italian are equally bad. And now that I’ve lived abroad for so long my English is deteriorating.
But as I predicted at the turn of the century, American institutions are unraveling. My leaving for Europe was the best decision I ever made back in 2005 after my Bricktops at the Parlour Club performance space closed when the film producer owner of the bar it was housed in sold the place.
I could never return to Los Angeles or America to live. There really aren’t any countries or nations anymore. It’s all dullard corporations and icky brands.
“We are living in unutterably tedious and vacuous times”.
I hope I am quoting British pundit Mark Simpson, the creator of the term “Metrosexual”, correctly.

Given your health, the world’s health, the scene’s health, what do you have planned for the near, or mid-term in terms of projects? And beyond that who is doing work that interests/surprises you?

Well having been recently diagnosed with late onset type one diabetes I feel fortunate to live someplace that provides health care for artists and my health insurance pays for therapy, eastern/western medicine and deep tissue massages. Diabetes is a full-time job so my art production will have to take a back seat and I’m only working on commitments made before the pandemic. I also have no plans to travel and increase my carbon footprint. Which I don’t mind as I’ve always hated aeroplanes and airports. What I do miss is when I am put up in a cute, stylish boutique hotel.
Other artists though? I’m always being surprised and shocked by my sister of the clothe Alice Bag. She recently relocated to CDMX and her high octane energy and relentless output of projects puts me to shame. Ms. Alice Bag, along with Kembra Pfahler of the Voluptuous Horror of Karen Black, the mother of availabism and anti-naturalism, writer and painter Lisa Teasley, Bibbe Hansen and Susanne Sachsse the fearless leader of Berlin`s CHEAP art Kollektiv  are all bonafide geniuses!
I also admire the work of zinester and musician Osa Atoe (Shotgun Seamstress, New Bloods), The Linda Linda’s, British punk trio Big Joanie, the disruptive anarchic work of feminist and trans militant organizations The Madame DeFarges and Fist of Diana.

Creativity: how much of it is a muscle that must be exercised or a skill that you either have or don’t?

I’ve always been artsy fartsy, involving myself in zany creative pursuits to keep myself occupied and entertained. I’m the baby of three older sisters, so I had a built-in test audience. I’m also a closet introvert who pretends to be an extrovert just to get things accomplished. In reality I’m quite a loner and I don’t consider myself particularly well skilled in anything, which is why I’ve always felt talent is negligible.

My mother Mary Magdalene was famous in her own right and commanded a lot of respect in her working class lesbian community for defying authority figures including the police. And my Mother dearest was encouraging but only up to a point with her tough love policy. She thought I had the worse singing voice imaginable, and she was right, but that has never stopped me from getting my so-called act together and taking it out on the road, just like Betty Buckley.

You know what’s hard to believe, but for about a decade my day job was as an administrative assistant at UCLA’s Placement and Career Planning Center. On my lunch hour I’d go and ogle the humpy water polo team, and I used my position like it was an art grant that provided me free access to a Xerox machine, which is how I paid for my independently produced periodical Fertile La Toyah Jackson and its supplement Shrimp, the Magazine For Licking and Sucking Bigger and Better Feet. My main influences in publishing though were After Dark and Dance Magazine, Manipulator and a rag very few people remember Viva.

But I had the corner office in the beautiful Frank Gehry designed Placement Center, conveniently located in the center of campus. I got the job through the famed TV actress Heather Locklear as her father Bill Locklear was The Center’s director, so he was my boss, and a great boss he was at that. And Bill Locklear was just like his daughter: sweet and open. He also adored freakazoids, which was the only reason I lasted there for so long.