Doing What Xiu Xiu Do Best

Jamie Stewart's band Xiu Xiu's made a certain cinematic reinvention a practical necessity for survival across any and all creative boundaries. What? You didn't know? 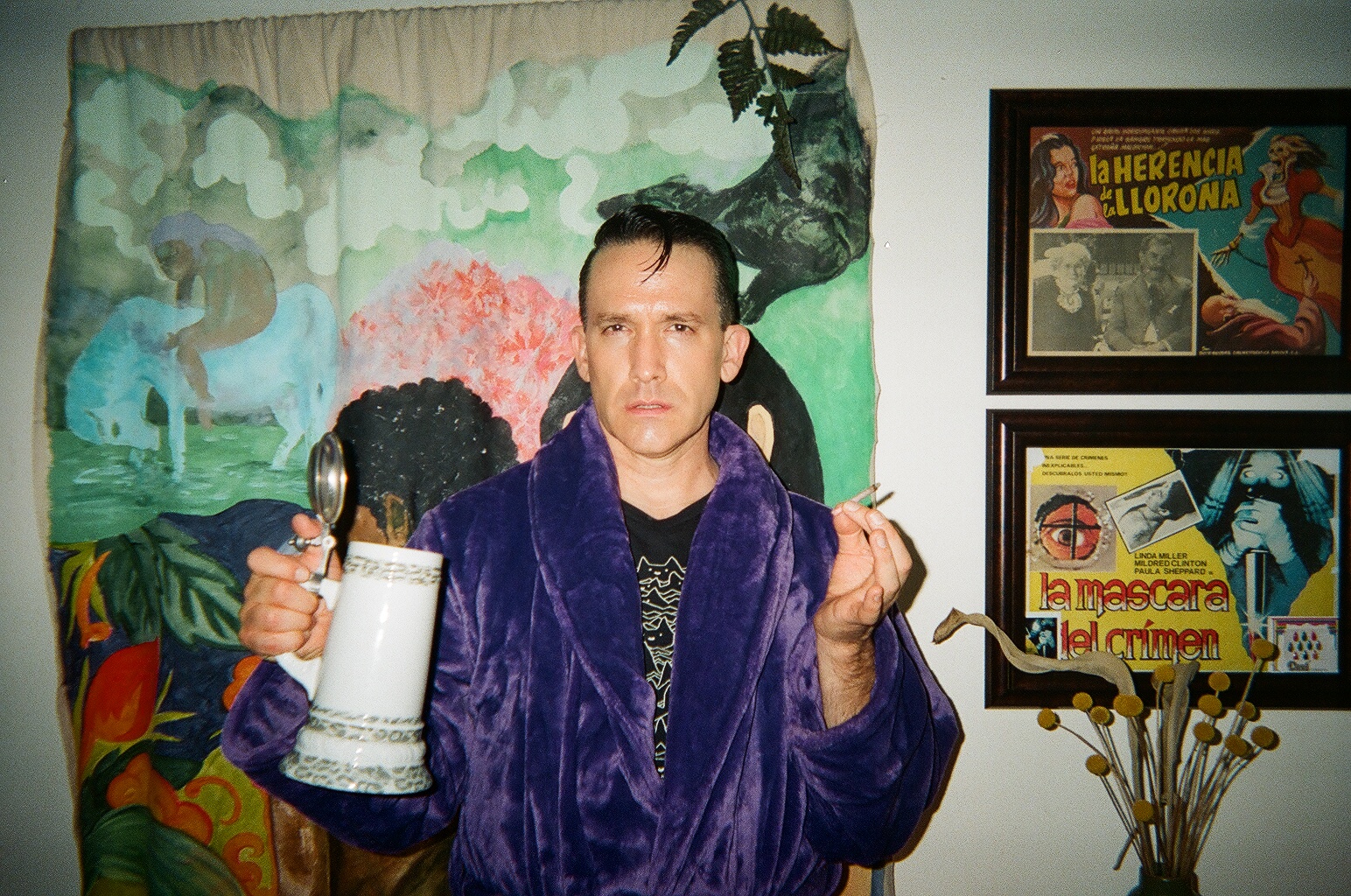 It’s the color palette that’s so, initially, disarming. If you knew nothing about Jamie Stewart or his band Xiu Xiu, a multi-headed thing that’s done everything from sonic covers of David Lynch film soundtracks to tackling the terrifyingly significant Nina Simone songbook, at first glance you’d…assume. What? Well with all of the baby blue pastels, purples and Stewart’s own sweetly configured visage that you were in for something that Tina Turner once called “nice and easy.”

But like Turner says, and something that would gather Stewart’s full endorsement, they’re much more prone to be something “nice and rough”. With record titles like Dear God I Hate Myself, and Knife Play, along with a steady lyrical focus on chronic despair, sexual clarity and sometimes suicide — Stewart’s father, a producer of Billy Joel’s Piano Man killed himself — we’re not even sure about the “nice” part. But rough? You got it.

So from collaborations with everyone from Devendra Banhart, Deerhoof, as well as an autobiography accompanied by an audiobook due out in early 2023, along with a new record dropping the same time (and it should be mentioned: playing the Oblivion Access festival), getting a minute of his time for The Live Five? Well, we guess that’s the nice part.

You’ve been a musician for a long time, and it seems that this comes from a family tradition vis a vis your father (and your uncle)? But there’s a BEFORE and AFTER element in your life as a musical artist consequent to a chat you had with your father. What happened there?

This is perceptive. There very much was a The Pearl  conversation with my dad about music and the reason to pursue music. He was a very successful record producer, session guitar player and was in a band that had a hit in the ’60s. In IBOPA [an earlier band], he could tell I was floundering but at least wanting to get serious about it. He asked me why I wanted to be serious about it. I was not prepared for this question and just stood mute as one does in front of one’s father. He said the reason to do music is to try and touch people, it is an act of attempting to give. Then he said his biggest regret in music was that he played it safe, he tried to make things nice and he wished he had taken things further. Then he looked me dead in the eye and said really quietly, “always take it too far.” This is corny but both of these statements have guided me since. Both of these statements are the best advice I have ever been given about anything ever. (Or worst considering the situation.)

Did he live long enough to experience any of Xiu Xiu in any form at all? If so, did he understand it?

By the time that band was going he had sadly dipped REAL hard back into drugs and was losing his mind. He did hear us twice. I played him the mixes from our first record and he was enraged at how quiet the vocals were. This was the day before it was to be mastered and he made me take the 2 track mixes and sync the vocal takes against it as a third track to make them more audible. He did give a shit about how it would turn out.
And he saw us play once in Sacramento. There were about 12 people at the show. When it was done he was surprisingly lucid, at that point he was generally incomprehensible, but he was incredibly sweet and supportive. I don’t know that he liked it but he seemed to appreciate our trying to go full on. He killed himself about a month later.

Given that you’re a multi-instrumentalist — and please give me a run-down of what you play for how long you’ve played it — how are you choosing the instruments upon which you’re making your music? And since you’ve done film work too, does this kind of thing determine what is picked?

I am kind of a hack on all the normal rock band stuff: guitar, bass, percussion, synths. And I sing. I might be less of a hack at making off putting or unusual sounds. All these instruments were around the house when I was a kid and started playing everything when I was around 14. But it was always in the service of trying to write a song or make a song seem more interesting: i.e., more or less I never tried to learn to shred but focused on how sounds could be made and what they felt like in a certain context. This wasn’t conscious but in considering what I can and cannot do now, it seems to have come from this. I try not to put a lot of consideration in choosing what instrument to pick up, I try and let the lower brain stem/muse be in charge of what happens. The classic “get out of the way” approach. Between my bandmate Angela Seo and I, we have a decent collection of instruments at this point and they are all in the same place and plugged in or accessible. We walk over to one and see if it feels right for that moment in the song.

Structurally I find it interesting how Xiu Xiu exists…there’s been a lot of talk about creative democracy that posits creativity as inherently collectivist. However, the one constant factor in Xiu Xiu is you. How did this happen and how, and what, was it informed by?

The set up being that there are always guests, some regular, some for one night only, on our records taking up the roles that other full time band members would have came about in two ways. The first is that I am in love with a wide world of sounds and one way to get more of that wide world is to ask musicians who are excellent at what they do to be themselves on a record. There is nothing I want more in music than to be surprised and one can only really surprise oneself so often. The more talented hearts added to a part of a record, generally the better. The second is that I have had a fuck of a time keeping a regular line up together. Angela has been in the band since 2010 but she has a real job and can’t tour all the time nor be in our little studio all the time so I have had to try and find other people to take this up the massive hole she leaves when she can’t be there. I am, apparently, a horrendous judge of character though. Despite years of lame-os making a mess and quitting or getting fired, records still need to be finished and tours need to be toured. I am not going to quit nor get fired so one way or another, it has got to get done. That has come to mean asking people too busy or too good to really join the band to contribute to records. An upside has been that many of my all time favorite musicians, people I am a for real fan of have been on our records. I would love a regular full time line up but as that is elusive, I am very very happy to have found a productive and expansive way around that.

I vastly prefer how you’re handling/focusing on sexuality. In a way, it reminds me of Little Richard, without all of the later life God chatter. So it sort of ends up being political by being so unabashedly apolitical. Was this accidental or thought out?

It’s funny you should mention Little Richard. I have been teaching courses on Atlas Obscura about experimental music and a section focused on Little Richard and Esquerita. They were experimental in that they were the first people in Western music to play with CRAAAAAAZY, flamboyant clothes and hair, ambiguous but overt sexuality, intense physical movement, wild wild wild vocalizations and songs flatly about using lard for anal ALL AT THE SAME TIME! They invented rock and roll stagecraft, and were therefore experimental in their presentation. Not a lot has changed since then; those elements are almost always there, unless you’re in a band like Pavement or something. I will say, although Prince stole his vibe from Little Richard, the first record I ever bought with my own money was Purple Rain. That probably says it all.
But, look, I try as hard as I can not to think about what I am doing and just muddle forward. I am sure everything connected to what I do is changing, it has to be, but I don’t want to know how. I HOPE with experience we are getting better and more than that, bolder. But maybe “better” is an impossible way to consider music, or anything, and determining what “better” means is out of one’s hands most of the time while making something. And certainly out of one’s hands once it is released. But I think that the drive to continue to learn, expand, take risks and never give up is in one’s hands. That I do think we are both at the very, very least hoping to do, and be better at.